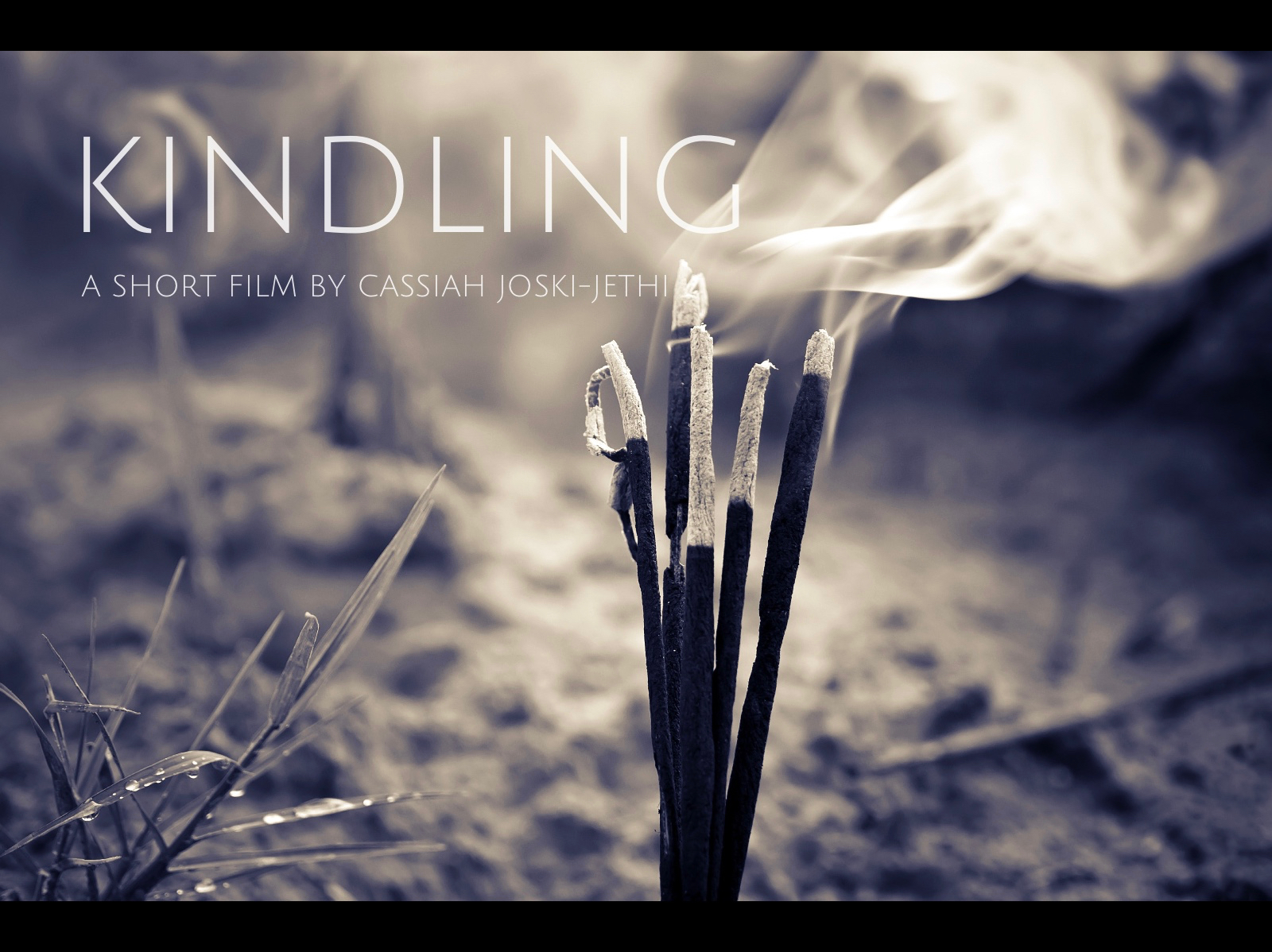 I’ve blogged here about my own fitful ventures into the field of indie films. However, today on this blog, I’m featuring an awesome Q&A with talented indie filmmaker Cassiah Joski-Jethi. She’s currently crowdfunding a new short film, Kindling. You can check out the campaign here or click on the above photo. Cassiah recently completed another short film, Woman of the Night. And, for what it’s worth, I’ve previously mentioned Cassiah’s film, Polly, on yet another blog.

In any case, without further ado, here’s the interview, which focuses on her latest project: Kindling:

Debbi: Your Indigogo video for Kindling alluded to The Princess Bride, a movie based on a story being read from a book. Any thoughts on the difference between the power on the mind of reading a book versus watching a film?

Cassiah: I think both are very powerful forms, and I think it’s up the individual which one they find impacts them the most. For me, reading was something I found very difficult and I always felt very hyperaware when I tried to make it through a book. In contrast, film was very easy for me to immerse myself in, and therefore it had a bigger impact on my imagination.

Debbi: The theme of the mind’s capacity to persevere and rise above adversity is powerful. Tackling it in a six-minute film must have been a challenge. Without giving away the story, how did you convey those ideas using (I assume) mostly sound and visuals?

Cassiah: The film has no dialogue, and it is all being told through the visuals, sound design and music. In order to portray the power of the mind, the film has quite a surreal style in which the “real world” merges with that of the fairytale/make believe. We see how our protagonist Emily feels trapped and hopeless, but symbols from classic fairytale stories pop up throughout her day – symbols that are from a fairytale-esque dream she has at the start of the film. I think it’s impactful because it’s something that everyone recognizes – when we’re younger, we all play Kings, Queens, Witches, the Hero/Heroine – and the character Emily creates in her mind actually helps rescue her.

Debbi: Your previous short, Polly, had elements of the surreal in it. What draws you toward using surreal imagery?

Cassiah: When I studied Drama and Theatre Arts at University, a lot of emphasis went into postmodern theatre. I was really drawn into this, and ties into my love for contemporary dance – how is the imagery prompting the audience to feel, rather than feed them a specific narrative or thought? So I’ve ended up bringing this into my directing style – creating powerful and thought provoking imagery without being too prescriptive, so the audience can make their own meanings from what they see.

Debbi: What other filmmakers or screenwriters do you find inspirational? (Is—dare I ask—David Lynch one of them?)

Cassiah: A film that absolutely blew me away was Jennifer Kent’s Babadook, and she regularly uses the idea of children’s monsters (again, the power of the individual’s imagination) to depict stories where the monsters represent underlying issues being suppressed. This is similar to the surreal aspect to my work, with the surreal elements and imagery telling a story with layered meaning beneath it. I, of course, am a big David Lynch fan, also. When I was younger, I was a massive fan of Tim Burton’s early work like Beetlejuice and Edward Scissorhands, which have big surreal fantastical elements.

Debbi: You’ve set the film in period and modern era. What period and how did you work diverse eras into a short film?

Cassiah: The short opens in a period-esque era, and suddenly transitions into modern day a few minutes into the film. The reason I say period-“esque” is because this is representing the fairytale setting of Snow White, Beauty & The Beast, Sleeping Beauty, Cinderella, etc.

I’m hoping for the audience to assume that it’s a period drama when they begin to watch it, and then feel very surprised when there’s a twist in events and the film jumps forward to the modern day. It’s quite a unique format for a short film, and hopefully will be engaging.

Debbi: I’ve never been to rural Warwickshire, but from the look in your treatment, it could just as well be set in rural Maine or Kentucky. (I say this for the benefit of my readers in the U.S.) What made you choose Warwickshire, in particular?

Cassiah: I think the Warwickshire area is quite romantic, but also the film depicts the isolation and loneliness that can come from it. Dare I say, the romantic fairytale is not all that it seems.

Debbi: Have you considered making a feature or do you prefer the short form?

Cassiah: I’m actually in development on a feature at the moment, and I feel much more at home with the feature format because I love to tell long-form narrative. I actually find short form more difficult to get a handle on, because you have only ten minutes or so to communicate some very complex and meaningful stories. So you have to be quite clever in order to pull it off!

Debbi: I love your use of subtext and the way you allow viewers to draw their own conclusions. Your short film, Woman of the Night, is a great example of a character study that drives a point home without hitting you over the head with it. Bearing in mind that there have been great character-driven feature films, do you think short films do the same with greater punch and economy?

Cassiah: It depends. I feel like short films are sort of a window into the soul, but it’s only a quick look in. I think you can set up very complex and nuanced characters, but you’re always going to be left wanting more. I think that’s why my work can potentially be quite divisive, because I push beyond the short film limitations; you can tell these characters have a bigger story to tell, sometimes leaving the audience either a bit bored or a bit frustrated I expect!

Debbi: You’ve achieved a lot in your film career. What’s your advice for anyone who’d like to work in the film business?

Cassiah: If anyone wants to work in the film business, I would say to create as much as you can – make your own films, write scripts, direct what you can – as you’re working your way up in the industry. It’s rare that someone will give you an opportunity unless you have something to show for it. No one is looking for perfection, but they want drive and ambition. And also, contact people! Any filmmakers you know, or even don’t know, email them and ask them for advice. The worst thing anyone will say is no, and if they say yes, you might have just gotten your break into the industry.

Debbi: Is there anything else you’d like to add that I haven’t asked you about?

Cassiah: For Kindling we are hoping to shoot on film, which is very expensive! We’re raising funds to help make this become reality, so if you can please check out, share and support our campaign, that would be fantastic. If you love film, you can get involved, even get your name on the film as a co-producer! And the great thing about film is that it will live forever. Link: https://www.indiegogo.com/projects/kindling-short-film

After graduating from the University of Birmingham with a 1st Class Honours degree, Cassiah began her career working for Gurinder Chadha OBE after a chance meeting on a train.

In 2016, Cassiah’s award nominated play Under My Thumb debuted at Greenwich Theatre and later toured across the UK in 2017 to critical acclaim. It was a finalist in the Red Women Theatre Awards in 2016 and was nominated for its second award Best New Play at the New South Writing 2017 awards.

Cassiah signed with a writing agent in January 2017, and worked on two feature screenplay commissions, ‘The Winchester Geese’ (Altter Films), and ‘The Canary Girls’ (Mark Andrew Powell). In addition, her short screenplay ‘Evers’ was a semi-finalist for the Shorts On Tap Horizon Award and was optioned by East Head Films. Also in 2017, Cassiah completed her directorial debut award winning short film Polly which has screened across the UK and internationally.

This year, Cassiah was a finalist for the West Field Screenwriting Awards 2018, and made the longlist (top 3.5%) for the BBC Script Room Drama 2018. She also recently completed the feature screenplay commission, ‘Maiasaura’ (Unfolding Entertainment), and also had her short play How To Invest In Poverty staged at Greenwich Theatre. Her second short film Woman of the Night  was recently completed and is currently being submitted to festivals. Also, Cassiah’s original action/adventure series is currently in development with Gurinder’s company Bend It TV and Fremantle Media. Cassiah is also a member of the BFI Network X BAFTA Crew 2018.

As well as directing narrative film, Cassiah regularly directs BBC2’s The Naked Choir winners, The Sons of Pitches music and digital media videos, including their award nominated video for their Wuthering Heights Kate Bush cover (CARA Awards 2017). In addition, Cassiah is an Associate Producer on the feature film in development Cavegirl! The Movie.

Thank you so much, Cassiah! I don’t know about you, but I’m feeling inspired! 🙂 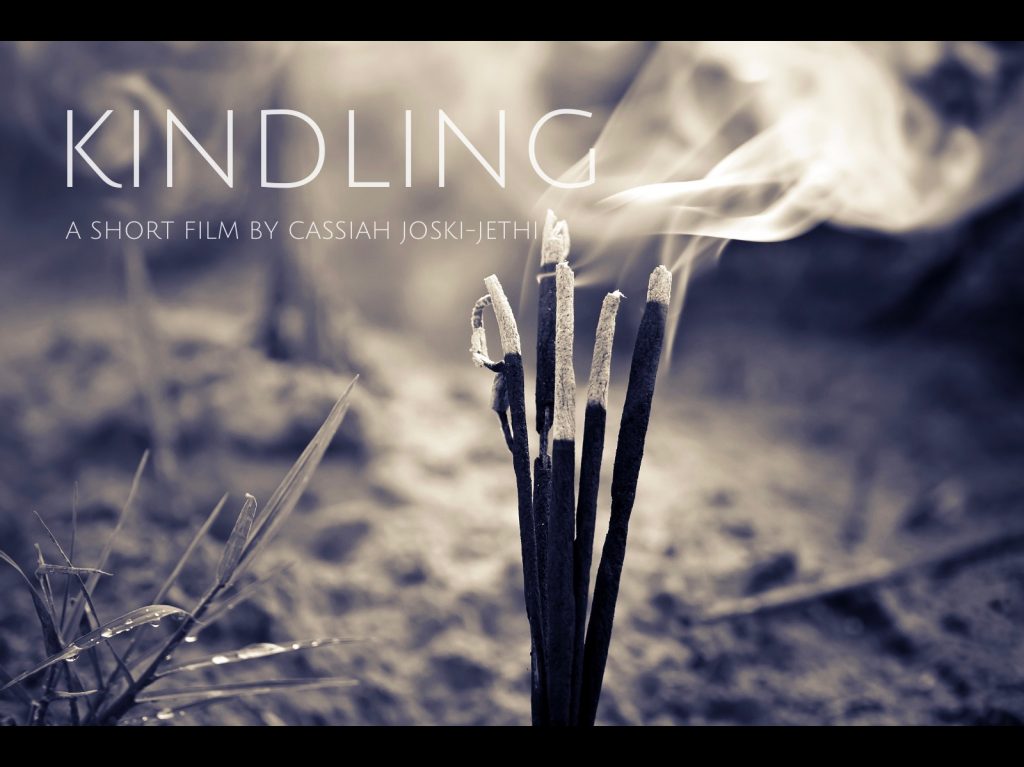 I urge you to click here and support Kindling on Indiegogo! #SupportIndieFilm